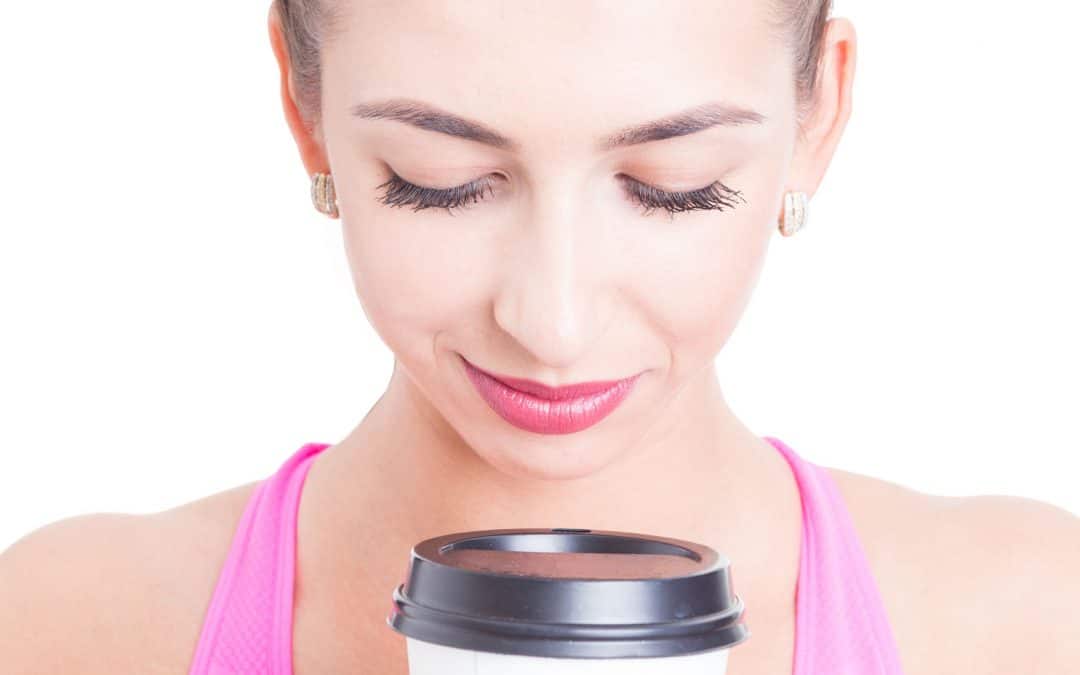 Can Coffee Rev Up Your Workout?

See my New York Times letter commenting on the effects of caffeine on exercise!

Your inherent (genetically coded) rate of metabolizing caffeine has an influence on its effect on exercise.  That rate is determined by how rapidly or slowly working the enzyme is that processes caffeine.  The particular enzyme responsible is known as CYP4501A2 (catchy name!). Our genetic makeup determines the exact configuration of that enzyme, which in turn controls whether it is fast or slow. However, other outside factors may influence the products of our genes, like CYP4501A2.  For example, I was aware that cigarette smoking induces (or speeds up) this enzyme.  So, as the Times article showed that fast 1A2 metabolizers got more of an oomph from caffeine, I added an observation about cigarette smoking and caffeine consumption. Here’s the letter!

By the way, when I do genetic testing, this is one of many items that I look at because this same enzyme is also responsible for processing some medication. Also, some medications can speed up or slow down this and other enzymes, affecting the levels of other medication you might be on. So, applying clinical knowledge to the results of genetic testing is important in optimizing treatment for conditions like depression, anxiety and ADD/ADHD!

In the best of mental health!

This post was originated on Dr. Neal Ranen.com April 2018

A new medication, vilazodone, has been approved by the FDA for the treatment of depression. It is going to be marketed under the brand name “Viibryd.” It acts as an SSRI (see blog dated June 27, 2010 for an explanation of SSRIs), plus modifies a serotonin receptor which may provide enhanced benefits. There is already an available medication, buspirone (or Buspar) that exerts its action on this particular serotonin receptor, called the 5HT1A receptor. In fact, we already combine SSRIs with Buspar sometimes.

As with all medication, Viibryd is associated with possible adverse effects (side effects), especially those commonly associated with boosting serotonin, such as nausea and diarrhea. Excessive sleepiness was also seen as an adverse effect. It may be associated with a lower rate of sexual dysfunction (lowered sex drive, for example) than seen with pure SSRIs. However, the full balance of benefits and side effects will become clearer with actual use of the medication outside of a clinical trial setting.

Chronic Unpredictable Stress and the Genetics of Depression

Caffeine is a stimulant. This means it can make people feel more awake and alert. Other effects caused by activating the nervous system can include an increase in heart rate and feeling shaky. Caffeine works by blocking the docking station, or receptor, on nerve cells for the chemical Adenosine. Adenosine is a constituent of the energy molecule ATP, which is produced when food is metabolized. One theory of caffeine’s effect is that as we go through the day and burn energy, adenosine builds up and starts to signal that we are tired. Caffeine blocks that effect. However, like other habit-forming chemicals, the body develops dependency to caffeine.

The two components of dependency are tolerance and withdrawal. Because of tolerance, the body needs more and more caffeine to achieve the same effect because it becomes used to the caffeine. On a molecular level, nerve cells (or neurons) start producing more adenosine receptors to account for being blocked by caffeine, so there are more receptors to trigger sleepiness and lowered alertness. Withdrawal occurs when uncomfortable symptoms are caused when the body doesn’t get the regular amount of caffeine it is used to, and the nervous system screams out for it, and is sluggish without it. Caffeine withdrawal symptoms can include fatigue, headaches, irritability and low mood.

People may feel as though their thinking is sluggish. With frequent caffeine consumption, some people who are sensitive to its effects may experience withdrawal symptoms even if they don’t have caffeine at the usual time of day. An example of this is with coffee drinkers who may have their morning cup of coffee later on the weekend than usual. Migraine sufferers are particularly sensitive to those effects. So, the effect of caffeine is similar to other habit-forming compounds — at first the person experiences a positive effect, but then tolerance sets in, requiring the person to consume more and more, creating a steady habit of use, and eventually caffeine doesn’t enhance the way a person feels, but they have to keep consuming it just to not feel worse than usual because of withdrawal.

This is how people can get hooked on coffee. What about the direct, negative psychiatric effects of caffeine? These can include irritability, short-fuse, depression, anxiety, and insomnia. Caffeine can contribute to insomnia when consumed anytime after the early afternoon. Because of the effect of caffeine on anxiety, it has been used to actually trigger Panic Attacks in some studies of this disorder. The general health effects of caffeine is a matter of debate, with some studies suggesting an elevated cardiovascular risk, and others finding a health benefit thought to be related to the antioxidants found in coffee.

The term “Personality Disorder” (PD) is, unfortunately, steeped with pejorative connotations. In fact, it sounds more like an insult than a therapeutic label. Nonetheless, the concept of a PD in its clinical terms is helpful in recognizing enduring counterproductive ways people interpret and react to their environment. Personality disorders are typically manifest in how people interact with others. For example, someone with obsessive personality disorder may be so hung up on their routines that they are completely inflexible. This might make it difficult to work with others, cause them to waste a tremendous amount of time, and prevent them from feeling a sense of peace or contentment because they are so focused on things being “just right.”

Another example is paranoid personality which is characterized by irrational suspicions and mistrust of others. Narcissistic personality is characterized by a pervasive pattern of feeling superior to others, the need for admiration, and a lack of empathy. These are just some examples of PDs. One of the important aspects of PDs is that they are often outside a person’s conscious awareness, so there can be resistance to accepting the idea. In some cases, it would be too hurtful to a person’s self-worth to accept that their view of themselves and people around them is inaccurate. In addition, they rationalize their behavior based on how others are behaving around them.

So, these chronic vulnerabilities cause a person to think they are responding rationally to their environment, but the behavior is actually self-defeating, ultimately causing emotional distress, not actually getting needs met in a way that makes the person happy in the long run, causing frustration, or interfering with relationships which causes distress for people in their lives. There are different theories of how people develop these entrenched ways of reacting. Theories range from PDs emerging from early childhood experiences, that they result from biological/brain chemistry predispositions, or that they stem from a combination of the two. It is probably best to think of PDs as personality vulnerabilities, which also avoids it sounding like an insult. Everyone has strengths and weaknesses. Sometimes very strong personality traits can lead to success in one area of life but cause damage in another. An example is with Narcissistic Personality Disorder which may be an asset on the professional side, for example in a sales position, but make it difficult to deeply connect with people on the personal side, like in a marital relationship. In fact, it had been proposed to remove Narcissistic, as well as some other specific personality disorder diagnoses, in favor of this concept of Personaltiy Traits in the official textbook of psychiatric diagnoses, the Diagnostic and Statistical Manual of Mental Disorders, 5th Edition (otherwise known as DSM-5).

This change is to reflect the concept that Personality vulnerabilities are not always so clear cut, that people can have a mixture of personality strengths and vulnerabilities, and that people can vary to the degree they are somewhat narcissistic, overly dramatic, or dependent. However, this proposed change is not without controversy, with many feeling that the new criteria are unweildy, impractical, and will result in a loss of clinically useful and valid diagnoses.

A recent study discovered a genetic variation associated with ADHD. The study found a greater likelihood of missing or duplicated segments of DNA (known as copy number variations) in children with ADHD. Therefore, rather than being perceived as being lazy or acting badly, this helps us understand that there are biological mechanisms contributing to ADHD symptoms. In other words, for many patients struggling to function with ADHD, it’s not that they won’t pull their act together, its that they can’t pull their act together (or at a minimum struggle to do so). These biologic contributions support the use of medication for ADHD. Of course, in addition to medication management, behavioral strategies are also important to create a structured environment and routine that isn’t accomplished naturally by those with ADHD.

By the way, many adults have the inattentive rather than hyperactive form of ADHD, which explains how the condition can go unrecognized into adulthood. The reason for this is that behavior problems in childhood often lead to the recognition of ADHD, and these behavior problems are typically not seen in the inattentive form of ADHD. Instead, adults with the inattentive type may have been labeled as lazy or underachievers as children. This can lead to self-blame and depression. Features of ADHD are further described in the July 3, 2010 blog post. Future studies will hopefully elucidate the exact genes involved in ADHD, and thereby more specifically inform treatment.