Attention deficit hyperactivity disorder is a chronic disorder that requires management throughout an individual’s lifetime, and it is often difficult for patients to manage without proper treatment. Each year tens of thousands of adults are also diagnosed with this condition. Adult ADHD is both genetically inherited as well as acquired through environmental factors before birth.

Attention Deficit Hyperactivity Disorder (ADHD) and Attention Deficit Disorder (ADD) can affect both children and adults, making it difficult to concentrate or follow through with the completion of tasks. Executive functions like planning, organizing and executing can also be difficult. An integrated approach that includes therapy and/or medication can be used to help you function and feel better. What is Adult ADHD?

Attention deficit hyperactivity disorder is a commonly diagnosed mental disorder in children. However, many individuals don’t realize that ADHD can affect you into adulthood especially when it goes undiagnosed as a child.

This type of mental illness is characterized by an inability to focus and is often coupled with hyperactivity and/or impulsiveness. Most people afflicted with adult ADHD will experience difficulty in managing everyday behaviors such as: maintaining focus in work and school, staying organized, managing their time, controlling their temper, and even the inability to plan effectively.

There are various ADHD symptoms in adults that can interfere with achieving one’s highest potential. Recognizing these symptoms in yourself or someone close to you does not necessarily mean that you or they have ADHD. However, it is important to begin your mental health journey knowing what to look for and we examine those symptoms in more detail below.

What Are Adult ADHD Symptoms?The symptoms of attention deficit hyperactivity disorder in adults have been well documented and can be seen in both men and women at any age. ADHD is a neurobehavioral condition that affects areas of the brain involved with self-control, attention, and activity levels.

Adult ADHD symptoms can manifest themselves in various ways and may include (but are not limited to) the following: 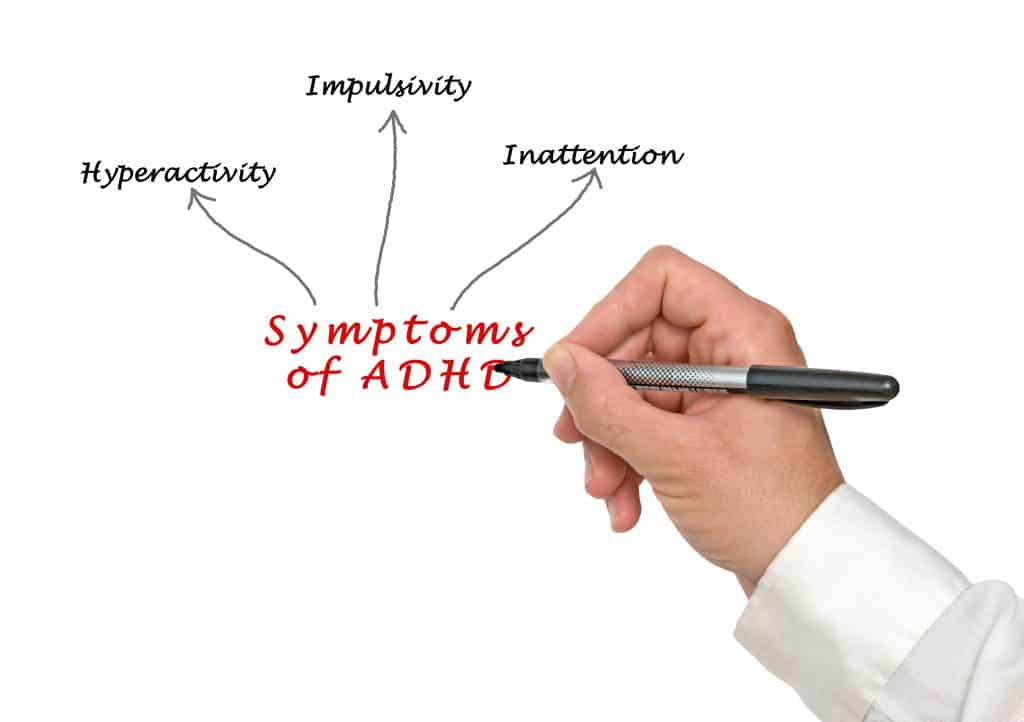 Most adults will experience some of these symptoms in their daily lives but that doesn’t necessarily point to a firm diagnosis of attention deficit hyperactivity disorder. A qualified mental health professional who has experience with ADD and ADHD symptoms can help you make this determination. Dr. Neal Ranen, our board-certified psychiatrist, has extensive experience in ADHD treatment and in helping you maximize your daily functioning and routine.

It is also important to note that Adult ADHD can also masquerade as anxiety, depression, problems with frustration tolerance as well as irritability, memory problems, low self-esteem, and difficulty with careers and relationships.

If you are experiencing any of the signs that are listed in our ADHD symptoms but your quality of life is not negatively affected, then seeking professional treatment strategies may not be necessary for you at this point in time. However, if the mentioned ADHD symptoms are causing you to have problems at work, issues in your family relationships, or with friends, then exploring treatment strategies with a professional may be a beneficial exercise.

What Is The Cause of ADHD?

Currently, there is no definitive scientific conclusion on the exact causes of attention deficit hyperactivity disorder. ADHD symptoms are believed to be caused by a complex interaction of biological, social, and environmental factors. Recent studies have found a link between genetic makeup and ADHD, which means that ADHD can be hereditary or passed down between generations as part of a family’s genetics. Link: Blog  https://drnealranenbaltimorepsychiatrist.com/adhd-and-genetics/

Other potential causes of ADHD include: 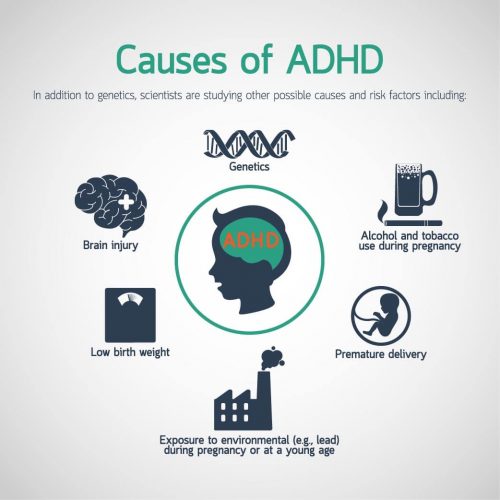 How Is Adult ADHD Diagnosed?

For some adults with attention deficit hyperactivity disorder, their illness goes undiagnosed as a child and they don’t realize they have ADHD until one of their family members or their children have been diagnosed.

Diagnosing Adult ADHD can be difficult because many of the symptoms are similar to those of other mental disorders. Unless a doctor is trained in diagnosing adult ADHD, it can easily be attributed to an anxiety disorder, depression, or bipolar disorder. 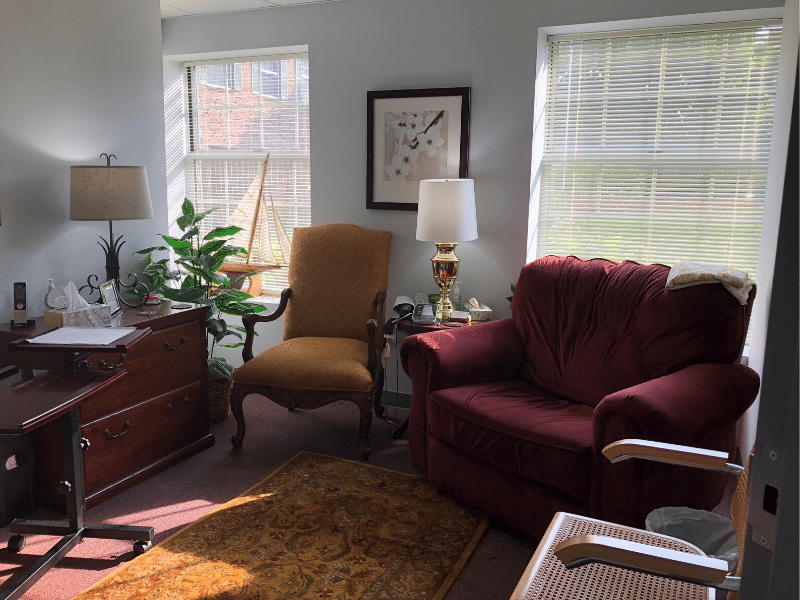 ADHD is diagnosed as one of three types; inattentive, hyperactive/impulsive or combined. A diagnosis is based on symptoms, like those listed above, that have persisted for at least six months, as well as recognizing in retrospect symptoms that have been there even before that, and that have caused challenges or distress in your life. Talking with a parent or significant other is helpful at times because sometimes the person with ADHD is so accustomed to navigating life with ADHD symptoms that they don’t really recognize them even when the symptoms are obvious to others. Ultimately the diagnosis is made on the basis of medical evaluations and judgment from a trained medical professional.

If your difficulties are recent or occurred only occasionally in the past, you probably don’t have ADHD. ADHD is diagnosed when symptoms are prominent enough to cause ongoing problems in more than one area of your life. Symptoms can be traced back to before 12 years old, although more recently some researchers have proposed that there can be adult-onset ADHD. Sometimes what appears to be adult-onset is just the unmasking of underlying symptoms as the number and complexity of adult responsibilities grow.

Adult ADHD can also masquerade as anxiety, depression, problems with frustration tolerance and irritability, impulsivity, memory problems, low self-esteem and difficulty with careers and relationships. If a diagnosis is not clear, Dr. Ranen will order additional testing to be sure you get the appropriate treatment.

What Are The Adult ADHD Treatments Available?

It is important for individuals suffering from Adult Attention Deficit Hyperactivity Disorder (ADHD) to understand that these symptoms are not signs of personal weakness; instead, they are the result of a medical condition that can be treated with medication or behavioral therapy. Adult ADHD treatment is administered on an individual basis to ensure that each patient receives the proper care for their specific symptoms.

Medications must be subscribed by a doctor and do cause symptoms to improve in 80% to 90% of people. ADHD medication is most effective when taken daily and it takes more than two weeks for ADHD medications to be at full strength.

Although ADHD doesn’t cause other psychological or developmental problems, other disorders often occur along with ADHD and make treatment more challenging. These include:

Mood disorders. Many adults with ADHD also have depression, bipolar disorder or another mood disorder. While mood problems aren’t necessarily due directly to ADHD, a repeated pattern of failures and frustrations due to ADHD can worsen depression.
Anxiety disorders. Anxiety disorders occur fairly often in adults with ADHD. Anxiety disorders may cause overwhelming worry, nervousness and other symptoms. Anxiety can be made worse by the challenges and setbacks caused by ADHD.
Other psychiatric disorders. Adults with ADHD are at increased risk of other psychiatric disorders, such as personality disorders, intermittent explosive disorder and substance use disorders.
Learning disabilities. Adults with ADHD may score lower on academic testing than would be expected for their age, intelligence and education. Learning disabilities can include problems with understanding and communicating.

How do I Go About managing ADHD?

There are a variety of treatment options available to help manage the symptoms. One of the most commonly used ADHD treatments is behavioral therapy, which focuses on changing behaviors and learning new coping strategies and routines. Additionally, medications can also be prescribed and can be highly effective in controlling ADHD symptoms. When you meet with Dr. Ranen he has a process that will determine your therapy plan.

What Kind of appointments does Dr. Ranen offer?

Dr. Ranen treats adult ADHD through both in-office visits and televisits. You can call our office to set an appointment. It is possible that after the Public Health Emergency declaration for COVID expires that the requirement for at least one in-person visit will be reinstituted in order for certain medications to be prescribed.

What Options Does Dr. Ranen Offer To Treat Adult ADHD?

There are a variety of medication and non-medication approaches Dr. Ranen uses to treat ADHD.

Medication: Both stimulant and non-stimulant medications are proven to work for ADHD.  There are many options. After a thorough discussion with the person, Dr. Ranen customizes the appropriate medication, doses and titration for each individual. Dr. Ranen will discuss with you the features and benefits of the different medication options.

Therapy: This may include aspects of Cognitive-Behavioral Therapy to implement effective coping strategies, ADHD Coaching strategies (organization skills, scheduling strategies including time-blocking approaches, etc.), and Psychoeducation to increase self-awareness to harness the person’s strengths and minimize areas where they struggle. Therapy approaches help the individual engineer their environment.

The combination of medication and therapy is often the most effective approach because medication makes it easier to incorporate the behavior and mindset changes of therapy.  In a sense, medication reduces the headwinds so things aren’t so effortful for people with ADHD.

Additional approaches: Lifestyle changes such as exercise and nutrition, as well as supplements may be included in Dr. Ranen’s recommendations

What is the difference between ADHD and ADD?

They are both the same disorder with slight variations of ADHD, ADHD treatments focus on hyperactivity and impulsive behavior while ADD focuses more of the lack of attention.

For a more detailed explanation see our blog post, “Difference Between ADHD & ADD”.

Dr. Ranen offers Telemedicine, also referred to as Telehealth, Telepsychiatry, or Teletherapy.  Telemedicine refers to a video appointment on your phone, laptop, tablet, or desktop, through a secure, confidential platform. Dr. Ranen can see patients by Telemedicine even for the initial visit (note, after the current public health emergency is over, the first appointment in person will sometimes be required prior to ongoing Telemedicine).